As a kid, Keith Karnes loved walking in the woods near his home in Sauk Centre, Minnesota. Heading out after breakfast, he could spend the whole day exploring. Years later, this affinity for being outdoors, especially in forests, led Karnes to Wisconsin‘s Stevens Point, where he graduated with a degree in Forestry in 2003. In 2006, Karnes began working for the Leech Lake Band of Ojibwe, where he now serves as Forestry Director, blending the best available science with traditional ecological knowledge to make things work in today‘s world. In 2017, the Minnesota Indian Affairs Council appointed Karnes to the Minnesota Forest Resources Council as the tribal affairs representative. A straight-shooter who values action through collaboration, Karnes says, I‘m on [the Council] to make a difference My personal nature is go big or go home. 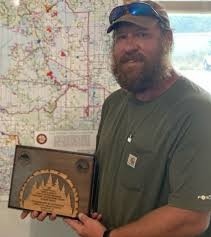 Today, Karnes‘ own forestry philosophy is deeply tied to the Leech Lake Band‘s tribal ideology, which holds resiliency, adaptability, biodiversity, and balance as key tenets. As Karnes will readily admit, these ideas didn‘t always form the basis for his own understanding of forestry. When Karnes first joined the Leech Lake Division of Resource Management, his coworkers called him the timber beast. I put up a lot of timber those first 8 years, Karnes says. Then I started looking at how I was doing it and I started thinking about the disagreements with tribal ideology. Since those early days, Karnes‘ understanding of forestry, and his role, has changed dramatically, in large part due to conversations with other members of the Leech Lake forestry team. I had to change how I thought, how I was taught to cut, Karnes acknowledges.

Now as Forestry Director, Karnes fully embraces tribal ideology, bringing a more rounded approach to his work. Tribes as a whole, they look at the forest much more holistically, Karnes says. During a presentation at the Sustainable Forests Education Cooperative‘s summit in 2020, Karnes emphasized that traditional Indigenous homelands are still homelands today, and should be managed accordingly. [Band members] look at super canopy trees as elders that they are related to. Stories have come down through the generations about how tribal members – they don‘t live in the forest. They are the forest. They are the wildlife. These are all one family and they‘re all together. Everything has its part.

Description: The Sand Plains Pine Project (SP3) is a collaborative effort among the Leech Lake Band of Ojibwe, the Chippewa National Forest, and the Northern Research Station to restore red pine plantations to a structure and composition closer to natural pine ecosystems using an ecological silviculture approach. This talk will present the cultural and ecological motivations for the project and highlight the silvicultural approach used for restoration.