I was born in Pineland, Texas (way behind the pine curtain) and graduated from high school there. I have a B.S. (1970) and M.S. (1972) in biology from Stephen F. Austin State University, Nacogdoches, Texas. My early years of employment were with the Texas Water Quality Board in east Texas and environmental consulting firms in Dallas and Denver. I began my US government experience with the US Army Corps of Engineers in Chicago in the permits program. After a very short tenure with the Corps, I began my career with the US Fish and Wildlife Service in the Albuquerque regional office as a land acquisition biologist. This was the first of three stints with the Service (seemingly, I am unable to hold a job for long); I also worked in land acquisition in Austin and Nacogdoches, Texas where I eventually retired in 2011. In between those stints with the Service, I worked for The Nature Conservancy (TNC), in Austin, as the Assistant State Director for Stewardship and Protection Planning and later as Program Zoologist for the Heritage Program. I also served as a Special Assistant to the Executive Director of Texas Parks and Wildlife Department before returning to the Service for the final time. Since retirement from federal service, I have worked part-time for the non-profit Caddo Lake Institute, now headquartered in Shreveport, and have done contaminant surveys for proposed National Wildlife Refuge land acquisition tracts.

I have served on the board and as president of the Texas Organization for Endangered Species (TOES), on the board of the Texas Academy of Science and am an elected Fellow, and on the board of three local conservation groups in east Texas. I have received a Stewardship Award from TNC in 1984; co-recipient of the Annual Publication Award by the Texas Chapter of The Wildlife Society in 1991; was named the Air, Land, and Water 4 Conservationist of the Year in 1993 by the Sportsmen Conservationists of Texas (SCOT); was co-recipient of Caddo Lake Institute’s 1996 Ramsar Stewardship Award to Texas Parks and Wildlife Department; and in 2020 was given a lifetime achievement award by the Friends of Caddo Lake National Wildlife Refuge. These days my hobbies and passions include hiking, gardening, yoga, baseball and support for the only team of Chicago on the South Side, and craft beer and quality gin appreciation. I am writing a book that may be published by Texas A&M Press, if I ever finish it, on Wetlands of the West Gulf Coastal Plain. I live in Nacogdoches, Texas with my wife Mary. I am the father of two daughters, Virginia of Dallas and Erin of Chicago. 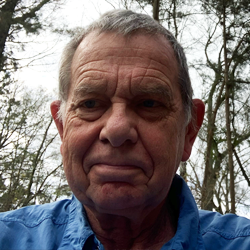