John Bacone retired from Indiana’s Department of Natural Resources' Division of Nature Preserves in February 2019, after 42 years.  During that time, he’s overseen huge growth in Indiana’s system of nature preserves – from 51 in 1979, when he became director, to more than 280 today. But he still remembers when he first understood the importance of natural areas. 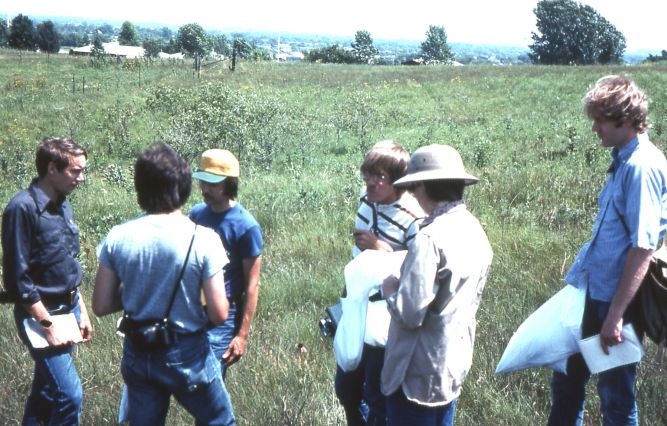 “When I was in college, there was a big interest in the environment. They were creating the EPA, the Endangered Species Act. The Park Service and Forest Service were growing. And I was very eager to get into that, but I didn’t really understand natural areas,” he says. That changed in 1975 when, for his second job after graduating with a Master’s in Ecology from University of Illinois, he was hired as a field biologist with the groundbreaking Illinois Natural Areas Inventory (INAI).

This inventory was the first of its kind, and many other states went on to use its methods to find and preserve their best remaining natural areas with the highest biological quality. Basing their searches on original land surveyors’ notes, herbarium labels, and old aerial maps, Bacone and his fellow ecologists were charged with finding potential natural areas for the state to preserve. His field assistant his first year was Fran Harty, who went on to a 26-year career with the Illinois Department of Conservation and then worked at The Nature Conservancy – Illinois. Harty later served as the Natural Areas Association (NAA) president from 1990-93.

The inventory group would frequently rent an airplane and fly above forests, hoping to find that it was old-growth and hadn’t been clear-cut. Sometimes they’d get lucky. “We’d fly over the prairies in the fall, see what was left around railroad rights of way and around little cemeteries, and once in a while we’d find a little gem,” he says. Then the state would try to buy the areas and protect them.

It didn’t take long before he could clearly see the contrast from the air between high quality natural areas and those that had a legacy of disturbance, whether from agriculture or past logging. “In the air, you can see the difference by the colors of the vegetation. On the ground, you can see clearly when you’re in the old growth: that’s where all the plants are.” 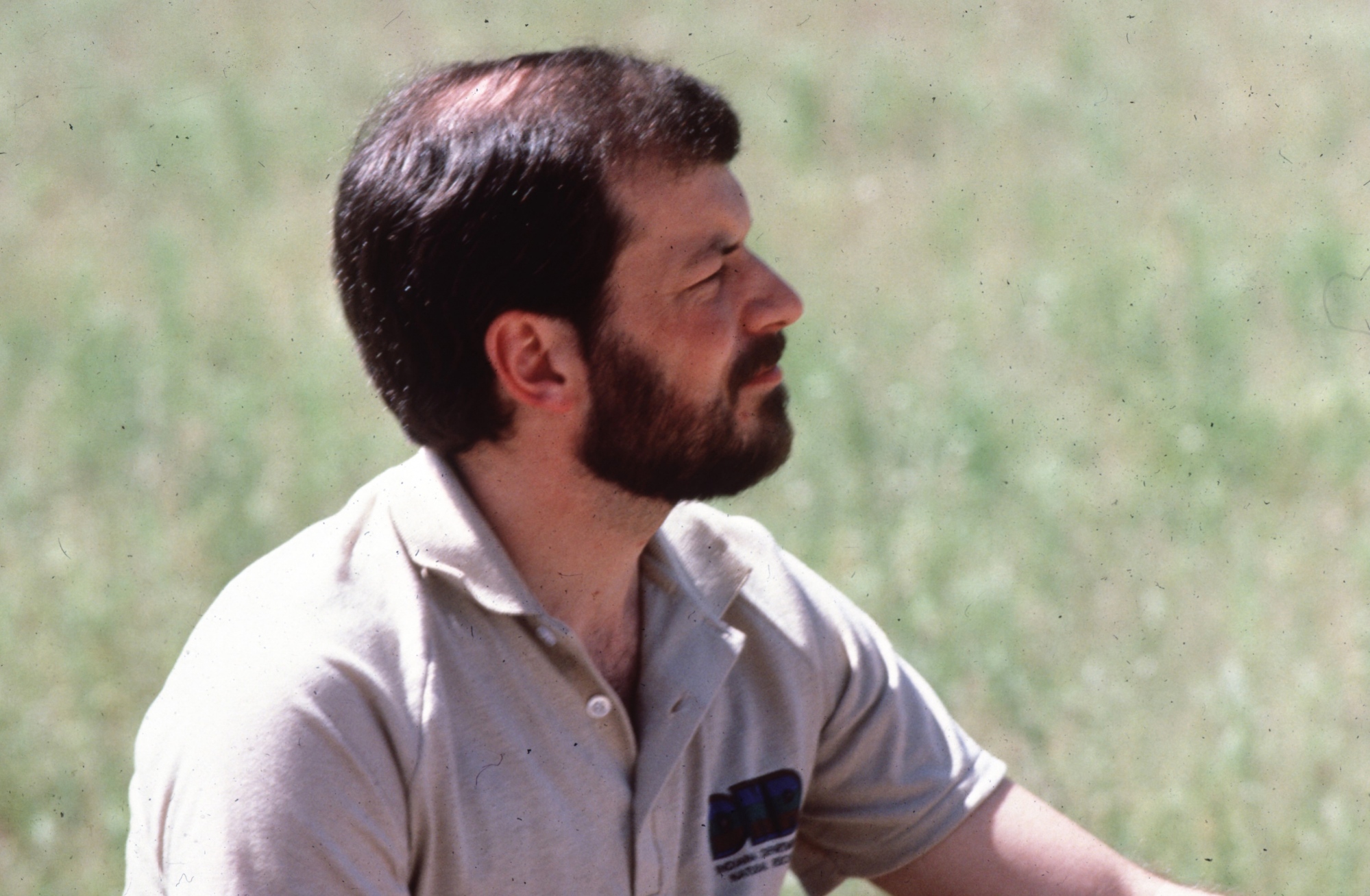 John Bacone in the field, in the early 1980s. Courtesy Indiana Department of Conservation.

At the same time, Bacone also realized that there was a core group of people around the legendary conservationist George Fell, founder of the Natural Land Institute, The Nature Conservancy, and of course the NAA, who were working to protect these areas.  “I realized that was what they were trying to do, their life’s work. And it just clicked. Natural areas became a passion,” he says.

He says he met George Fell and his wife Barbara in the first two weeks of his work on the inventory, while at the Natural Land Institute in Rockford, Illinois.  “He was kind of a tall, thin and studiously quiet man – I didn’t get much of a sense then of what a rock he was.” Later he worked closely with Fell when they both served on the NAA Board. 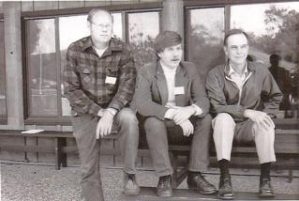 Bacone has been a member of NAA since 1979, served on the board for more than a decade, and helped organize both the 1992 and 2018 Natural Areas Conferences in Bloomington, Indiana. He feels strongly that membership in the NAA community has been a great help in his quest to preserve and manage Indiana’s natural areas.

“NAA has been invaluable in terms of information exchange with other state’s programs—legislative ideas, management techniques, budgeting ideas, and ways to improve outreach and support,” he says. 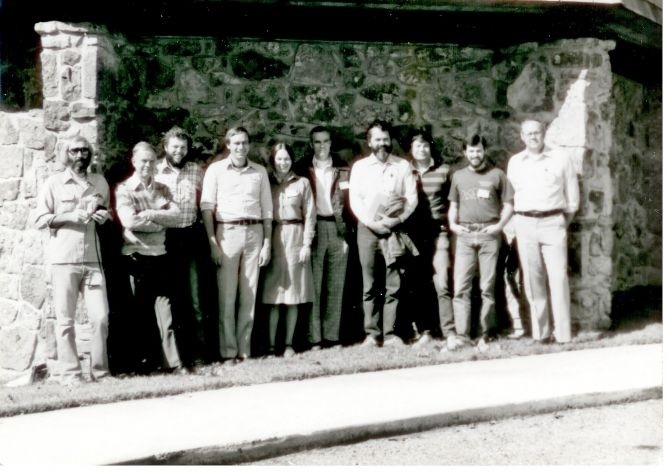 
Bacone points out that it was a good time for him and for natural areas. He was fortunate to be hired at the Indiana Nature Preserves in 1977 after his contract with Illinois was up and in 1979 he became director. He joined NAA the same year. George Fell had succeeded in getting the Illinois Nature preserves act passed in 1963 and Indiana had passed its own version in 1967. “There was real interest and momentum. There was so little left – people felt, let’s save some of our legacy before it’s all gone.”

So Bacone got busy doing just that.

His first order of business, he says, was bringing the skills he’d learned during the Illinois Natural Inventory to Indiana. “I thought, there have to be more natural areas here, we have to find them,” says Bacone. He spent his early weeks on the job visiting the nature preserves and meeting the property managers. Then he started on a Natural Areas Inventory for Indiana, cobbling together funding sources, including a grant from George Fell’s Natural Land Institute. Some money came from the National Oceanic and Atmospheric Administration (NOAA), since Indiana had a section of coastline. At first there were just three people, including Bacone, working on the project. But over the years he kept finding money and hiring ecologists, and it grew. “We pecked at it,” Bacone says. 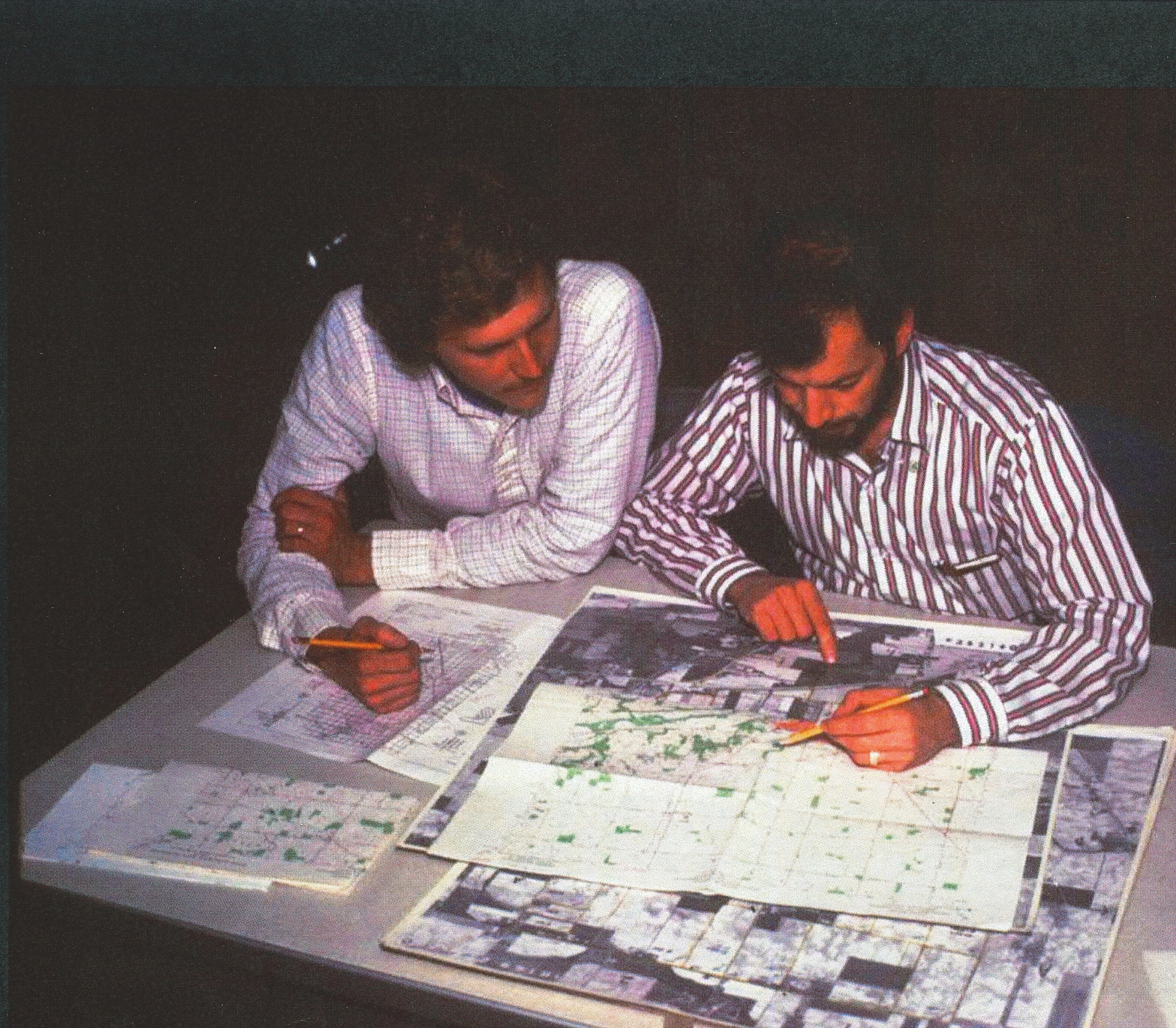 Since the Division of Nature Preserves was part of Indiana’s Department of Natural Resources (DNR), he remembers a high point was helping to coordinate a group from his the “big family” to conduct the first controlled burn in the state, helped by some experienced people from the U.S. Forest Service. “It was new. We were pretty nervous. No one thought about fire being ecologically healthy for these systems. Usually we just put them out. But we learned,” he says.

Another high point was in 1983, when conservation law legend Bill Weeks (now of the Conservation Law Center at Indiana University in Bloomington, but then working with The Nature Conservancy - Indiana) convinced the state to pass the Natural Heritage Protection Act. It made it law that if the private sector raised $5 million for natural lands, the state would match it. “We got four regional ecologists funded by that program,” Bacone remembers.

By the time the inventory was finally done, Indiana ended up with almost 60 high quality natural areas protected that were completely unknown before. Another impressive number: when Bacone became director in 1979, dedicated nature preserves in Indiana encompassed just 9,637 acres of land. Today, they cover more than 52,000 acres. 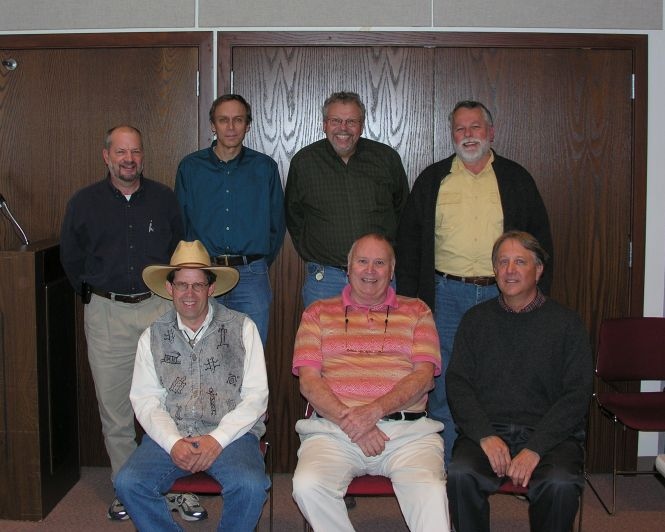 In recognition of his decades of work to preserve natural areas, NAA awarded Bacone their highest honor, the George B. Fell Award, at the 2007 Natural Areas Conference in Cleveland, Ohio. The award recognizes life-long dedication and commitment, creativity and the ability to forge new approaches that significantly advance natural area protection.

A lot has changed over his career, and Bacone points out that land managers are dealing with challenges now that didn’t exist when he began work in the 1970s. “When I started, there really weren’t a lot of invasive species. But starting in the late 1980s, they exploded,” he says. And climate change is set to greatly impact the management of natural areas, he adds. “We’re not getting burn windows because of climate change. More deluge rains and periods of drought. The first frost comes later, the winter ends earlier – and that enables other invasive species.”

He remains concerned that many of the natural areas he’s spent his life protecting are in “a sea of soybeans and corn,” which are often sprayed with chemicals that can have dire effects on other plants and animals. “Now we have neonics and dicamba. They’re tearing at the fabric of the integrity of these places. Not much you can do but try to get more buffers around them.”

But mostly Bacone says he feels lucky – and although it’s difficult to get him to say so, pretty successful. About finding the funding to conduct the Indiana Natural Areas Inventory, he says, “I feel really good about that. We found the old growth forests and prairie remnants. Our nature preserve system has protected one of every type of system – xeric forest, mesic forest, etc. – and we’ve protected a pretty high percentage of plants that are threatened.”

And he’s also happy about the relationships Indiana Nature Preserves have built with their partners. “When we started, we were a tiny division, and we weren’t really ‘at the table’ – but now the state uses our data to issue permits for pipelines or construct roads. With environmental planning at the beginning of the process, we can help protect these special places.” He adds, “We’re avoiding these traditional fights of us vs. them. The state needs to protect its natural legacy, and that’s more accepted by everyone. But it was a long battle.”

He also feels the partnerships between DNR and other organizations have been a big part of successfully preserving land in the state. “There’s the Nature Conservancy, Shirley Heinze Land Trust, NICHES Land Trust, lots more, and they’re doing the state’s business – protecting those special places. They end up putting in trails, publishing newsletters, we link our websites, so there’s great synergy. We’re not competing against each other: we’re competing against the clock to save a place.”

Bacone says he has had the privilege of working with many passionate and committed people during his career. He also recognizes that this passion for natural areas is just as strong in the young people he sees who are just starting their careers in conservation. “The trajectory is good,” he says.

Bacone has a lot to be proud of after four decades of labor. But despite his retirement, he points out, there is much work that remains. And he is relying on the people who are coming up behind him, and all of us, to continue it.

“People used to think, you buy this woods, it’s protected forever. But as Rachel Carson says. ‘At no time can we say our job is done.’  We know there’s more advocacy, more we need to do if we want to keep these places healthy in perpetuity,” he says. “There’s work to be done, but it will never be finished.” 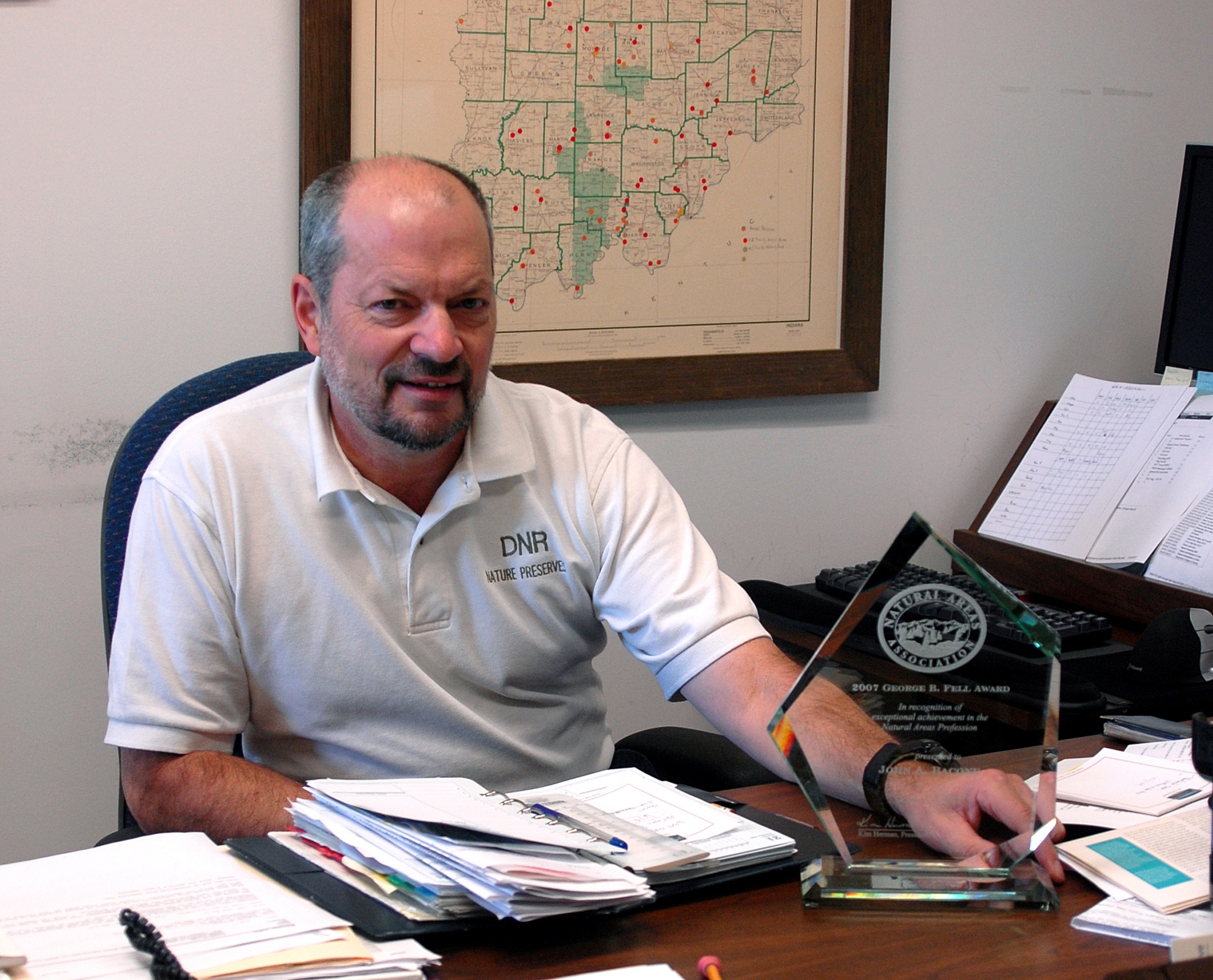