P is for Patchy Polygonella 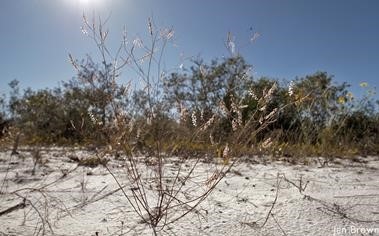 goals. While complete burns have a tidy and aesthetic appeal, patchy burns are increasingly supported as an approach to maximize diversity and keep lots of different species with different responses to fire in the landscape. Patchiness means greater heterogeneity with some areas completely burned and other areas missed or lightly scorched. Yet, there are few quantitative demonstrations of this effect. Archbold Plant Ecology intern Riley Book conducted an ambitious independent research project to assess the role of unburned patches as ‘"refugia" for post-burn recolonization of a federally endangered rare plant: Florida Jointweed (Polygonella basiramia). This species is killed by fire and has no long-term seed bank in the soil. Jointweed recolonizes burned areas through windblown dispersal of high viability seeds. Book mapped burned and unburned patches in Florida rosemary scrub while counting jointweed in these patches. Working with Vivienne Sclater, Archbold Data Program Manager, she used computer spatial mapping tools, or GIS, to analyze the connectedness (e.g., contiguous, nearby, or far away) of burned patches to local unburned patches or refugia. Book discovered that nearby refugia, and refugia with many plants, contributed to jointweed’s ability to recolonize after fire.

For Florida Jointweed, patchy fires are better. This research shows that patchy burns help keep this fire-sensitive rare plant in the landscape offering important direction to land managers on how to manage fires for this plant.